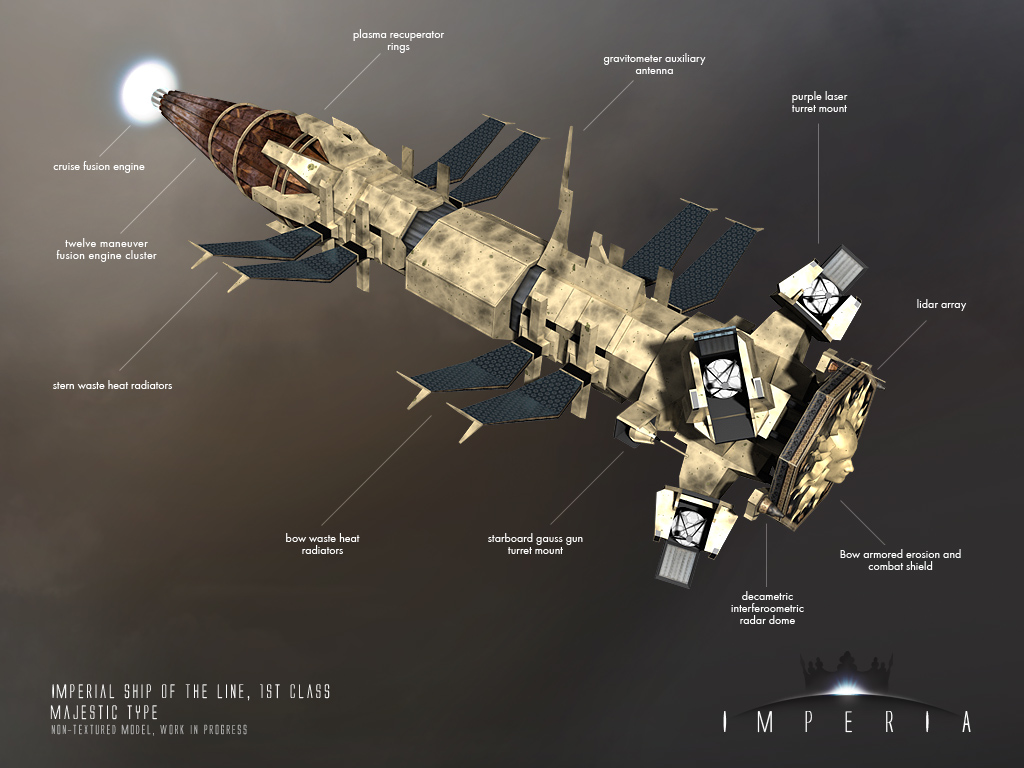 Sorry it’s been a little longer than I wanted, but I hope you agree that version .4 is worth the wait. There are a ton of new features, and the best part is that there is an updated wiki to go with it – it should help the learning curve somewhat!

Here is the link to the wiki: http://imperia5x.wikidot.com/start

Here is the updated changelog:

* Please uninstall any previous version of Imperia before installing a new version. I have not yet added patch ability. The good news is that the install is relatively quick.

* I am updating the WikiDot Imperia wiki periodically and this will be the best document for questions and how to play Imperia. Please refer back to it frequently.

* Fixed issue where if 2 Edicts were in a queue and one was deleted, it would cause an out of index error, crashing the game

* Fixed issue where a newly colonized planet would not actually know it was attached to the Empire, causing issues

* Fixed issue where removing a governor or viceroy would not calculate the correct power for a turn, causing huge issues with unrest that turn (basically a divide by 0 error)

* Fixed issue where characters would have very low PoSups upon generation

* Fixed some duplicate/advance traits for characters. For example, characters that are cruel are no longer craven as well, since cruel is more harsh than craven. This is a work in progress.

* Recategorized alerts to be more helpful. For example, a riot that causes damage is a critical alert, but a small riot that does no harm is now considered serious (orange). This should help to make alerts more useful.

* Added Luxury mineral effects on the service sector. Now a luxury mineral rating above 50 will increase the profit of this sector, while a rating below 50 will lower it.

* Added Effective Luxury Mineral rating – this is the second # on the right of the slash. Shows mineral rating that is effective after trades and propagation is taken into account

* Added Unrest modifiers to the Demographics tab. This will show you the major factors in a planet’s average unrest and change.

* Completely rewrote how Pops emigrate and choose planets – now instead of moving to the first planet they find that meets their criteria, they now have a ranked list that they can reach with some random thrown in, and then choose from that list with the most desirable planets weighted most heavily. This will create population clusters and allows more realistic movement, where system events will effect entire sectors without a simple ‘pop bouncing’ between 2 nearby planets

* Exploration stations can now be built at any distance. This will encourage more exploration, but the time and resources needed to deploy a faraway station will be higher

* Adjusted numerous UI displays to correspond to these changes

* Added check upstream and downstream to see if luxury minerals propagate through a trade network in a sector. This means that planets which are connected to the trade network in a given sector will send a portion of their luxury mineral value if that adjusted value is still superior to planets that are upstream or downstream; the portion will be relative to how far away they are from a hub

* Added arrow showing loss in economic sector due to riots

* Added retirement subsidy – now retired population will receive a subsidy somewhat lower, but roughly equal to the unemployment subsidy for that planet (depending on the ADL of the planet). You will be able to reduce or eliminate these at the risk of unrest and lowered posup if you are in a financial bind

* Added character continuum rating to affect their posup – however, characters that are powerful and have a high Tyrannical rating will see their posup increase due to fear

* Completely rewrote how retail and service profits are generated. Before, it used a rather complex but not-very-realistic formula. Now, 4 different values are calculated as part of the overall calculation:

* Amount of sales items – determined both by trade and by production capacity. Factors in food and manufactured goods, with a bonus for inherent retail sector capacity (small stores that offer services for money, but not necessarily goods)

* Service Efficiency – are there enough service workers in the sector to effectively sell all the goods for sale?

From those 4 values, it next determines the maximum amount of the theoretical budget that people will use, based on popular support, unrest, and unemployment. Generally, the better people are feeling about the planet’s situation, the more of their maximum budget they will spend in a given month. What this means in practice is that a planet can have the highest quality goods in the world, but if there are not enough people to either buy them or sell them, your retail sector will suffer. Conversely, you can have all the demand in the world for goods but if your planet can not produce them or ship them in, your stores will be empty. However, if you have both quality goods and the people to buy them, you can make huge profits.

* Added new submode to the Economic tab: Government Spending. This will break down all the subsidies and Edicts that a planetary government is spending its money on so that you can (finally) see where all a planet’s money is going. Details on each category will appear on the right-hand side when you mouse over a particular category.

* Added new Intel screen submode – Character Intel. Here you can see a list of all the characters in your empire, and communicate directly with them by clicking on their info. Also added buttons to toggle between Planet Intel and Character Intel.

* Added additional popular support factor – if a planet is using the sector subsidy to stay afloat, your people won’t like that much

* Added governor information on SID to assist with character interactions

* Changed the scale of money – now million is billion, billion is trillion, etc. to match the scale of an interstellar empire. Note that all figures are in thousands, so 1,000,000 is actually a billion (1,000,000,000). This is to keep the memory and space requirement down.

* Changed the riot system to have a minimum threshold planet-wide so that a planet cannot have riots if the overall planet unrest level is below 30. This prevents strange mini-riots on an otherwise very peaceful planet

* Lowered PoSup effects, both positive and negative, across the board. This will make for a more flowing game.

* No Starbase will make emigrating from a planet much more difficult, with larger Starbases making planets more of an immigration target.

* Increased the overall amount of goods that make it to the destination, somewhat nerfed the distance modifier

* Adjusted the profitability of the manufacturing sector downward

* Increased sector population per level of sector – increasing the base amount of pops who can be employed per level.

* Changed the effect of industrial taxes on whether a given sector expands or contracts – higher taxes will be much more likely to decrease the sector level, reflecting ‘choking off’ profitability and reinvestment

* Increased substantially amount of money that planets can potentially have at game start, making it less likely they start off ‘in the hole’ and giving you time to make changes, since there is now a penalty to your poSup for planets going broke

* When loading a game, sometimes the alerts are in the wrong category. This only happens for the current turn and is more annoying than anything. Investigating.

* If you use the mousewheel to scroll up and down intel lists, it also effects the zoom level of the quadrant map. I can fix this, but it will require a rewrite of the zoom function and is not a huge priority at this time.

So it looks like a lot of you have tried Imperia, and there have been a lot of questions about ‘what do I do now?’ While I understand this is a free hobby game, and it’s almost a tried and truism that these kinds of games are poorly (or not at all) documented, I realize that Imperia is not a game that you can just ‘pick up’ – there’s a lot going on under the surface, and comprehensive documentation is needed.

So here is where the documentation will be found going forward. It’s the Imperia Wiki, and I will be updating it as time permits. Please check https://sourceforge.net/p/imperia/wiki/Home/ for updates. And if you’re feeling brave enough to want to add to the wiki – let me know! I could use the help!