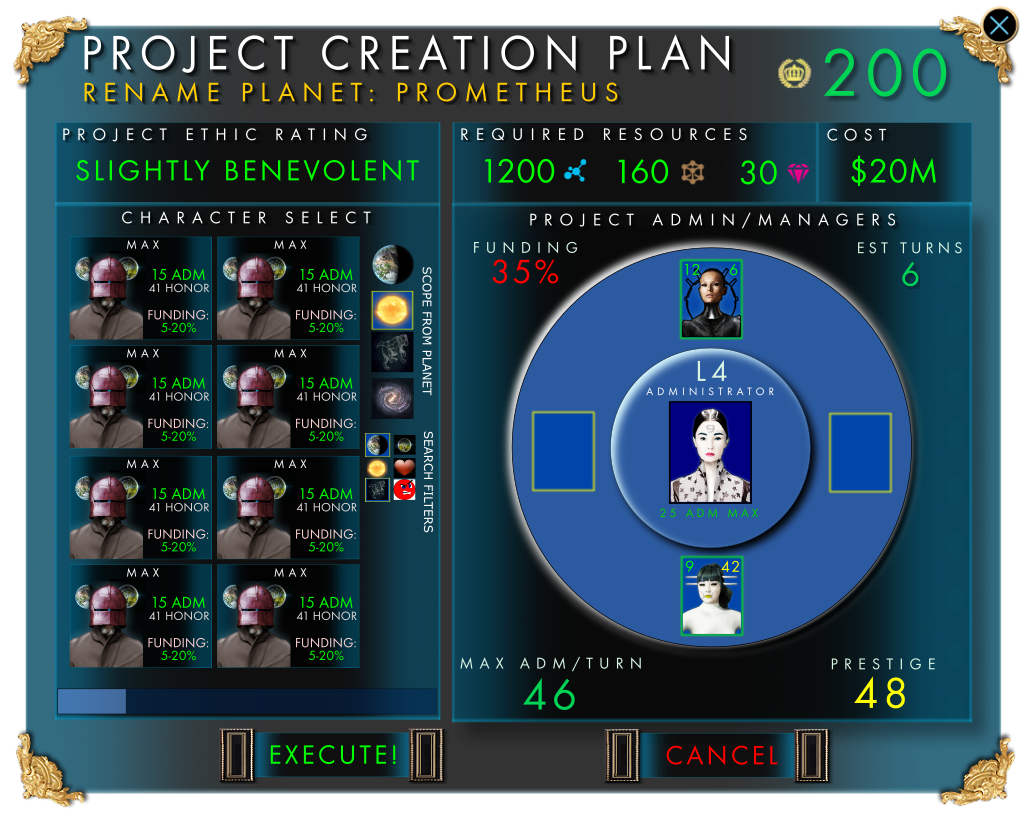 Good morning everyone! I hope the weather’s as nice where you are as it is here – in Texas, clear skies and 50 degree weather is about as good as it gets in January, so we’ll take it!

Anyway, in this second part of the Project post I’ll talk about corruption and what you can do to overcome it. When a character (contributor) commits to give money and ADM (short for ‘administrative points’, which is an abstraction for the men, supplies, construction machines, ships, transports, and logistical support needed to complete a Project) they only commit to a value that they could give, not that they will give. Depending on their attitude towards you, the Project, and the House that most benefits, they may choose to use their ADM to undermine rather than advance the project – and corrupt characters may even steal money from the pot rather than contribute to it.

You will get an alert from your Intel Prime if a Project is delayed due to less-than-expected ADM support, or if money is being stolen from it. At that point, you know you have a thief on your hands, but you don’t know which ‘contributor’ it is. The first thing to do is to take a closer look at who is part of the Project. When you select a character, you will see their public Honor rating, which is an indication of how likely they are to honor their obligations and not steal. Another factor that indicates how likely characters are to steal from a project is a hidden stat called Cover. Cover on a Project basically makes it easier for someone to steal, since it is theoretically harder to determine who was stealing if there are several characters who might be capable. Characters with high Honor generate a low Cover for the Project (since they are publically considered upright people, they generally are above suspicion) while lower-Honor characters generate more Cover (since they might be also considered people who would steal). Projects with a high aggregate Cover rating are much more likely to be stolen from.

(The reason we keep the Cover number hidden is that it’s a model for something that ought to make sense on a purely human level – if all but one of the participants are upstanding citizens, the one corrupt member probably won’t dare to make a move. One of the things we want to avoid here is overexposing the workings of the characters during play. This is a mistake Black & White II made when it showed you the mathematical innards of your Creature – it broke the illusion that it was actually, well, a creature. We want to avoid the same problem with our characters if we can.)

So what you can do? If you think you know who’s doing the deed, you can set your Inquisitors on them, but beware – they will find the truth. If the accused is guilty, you’ll be able to sentence them, and replace them on the Project. But if they aren’t, they’ll be free – and extremely angry. So you have to be subtle. On the Intrigue screen, you can look through each character’s history of Project, War Plan, and Plot participation. It might be that one character stands out as having a history of corruption – but perhaps multiple characters might. In that case, you may have to resort to entrapment: put together your Projects carefully, in the hope of tempting your suspects into stealing from a Project full of people you’re either sure are clean or have bribed, blackmailed or intimidated into staying clean on that Project. Alternatively, you could simply be careful only to employ your suspects in Projects where they won’t dare steal. Choose wisely!

Next: Pops – what’s changed, and Ideas – what they are!

Hey everyone! For those of you who have been with us for a while, you know all about Edicts – basically the way that you get stuff done on a planetary level in Imperia. When we sat down to redesign the game, we thought about what Edicts really represent. In the first Imperia, there wasn’t a lot of interactivity to them – you basically pointed your finger and said ‘do this’. While your vassals could slow down the project, there wasn’t a lot of rhyme or reason to it – plus, the way to build your Edicts was somewhat confusing, and assigning ADM from planets wasn’t very intuitive. So we knew we would be redesigning the screen from the start.

With that, what are Edicts? Well, you already have a lot of overlap with character Actions – you are asking characters to do things, and with Edicts you were asking more or less the same thing. It felt like a fiat, and there was very little interaction with characters beyond ‘piss them off, Edict slows down. Make them happy, Edict speeds up’. Since the core of the game is the relationship with your people and your leaders, this felt incomplete.

So we decided first to make Edicts only truly planetary-level and above decisions. Next, we thought about how to get characters involved, and to differentiate certain characters, giving the player tough decisions about how to create an Edict, while also keeping the actual physical creation extremely easy and intuitive. After much discussion, we have finalized the new Project system.

Why Project? Well, Projects are much more collaborative and expansive, while the very word Edict doesn’t leave much room for debate. Given the way they are now organized, and the fact that you will also be able to enact Progress Laws (we haven’t finalized the name yet) we didn’t want to confuse the player about what they were doing. Once you click on the Project in the list (similar to the Edict list), a Project Creation screen will popup. Here is a mockup of what the screen will look like:

Each Project now has an ADM cost, shown on the upper-right. They also have a base resource cost, and a money cost. They also have a ethic leaning, which can make it impossible to add certain characters if their morality is strongly against the ethics rating of the Project.

Creating a Project is now very simple: You assign an Administrator, and then assign Contributors by dragging and dropping the character card onto the slots on the staffing ring. To remove a character, simply right-click. When you have full funding, click Execute and that’s it!

The first step is to assign an Administrator of the Project, shown in the center of the staffing ring on the left. Every character in the game has an Admin rating of 0-9, and that affects both the maximum number of characters they can add to a Project as Admin and how much of their holdings’ ADM they can use for a Project if they are a Contributor. Once you have an Administrator, a number of slots equal to their Admin rating will show around the outer circle (position has no bearing on anything).

Your goal as the Emperor is to assign characters to help with the Project by contributing money and ADM. What’s in it for them is now reflected by a Prestige rating for the Project. This represents the amount of power and influence that they gain throughout the empire by being a contributor to a stellar-level Project. Generally, the more prestigious the Project, the more characters will be willing to contribute UNLESS it is a Project that will help a rival House (characters tend to be more loyal to their Houses’ interests than yours) The actual amount of power they receive is proportional to the amount of funding that they end up contributing (Admins get 50% of the value of the Project Prestige rating by dint of them being the Administrator).

Each character card on the right has the character’s name, their max ADM that they can contribute per month, their public Honor rating, and their funding minimum/maximum that they are willing to give to the Project. Their loyalty to you, their personal wealth, their desire for Power, and how much their House will be affected (positively or negatively) will all weigh into what they are willing to contribute. Characters who are not willing to contribute anything or who will not be Contributors due to morality concerns will be greyed out. To easily find characters to add, you will have range filters from the planet, system, province, and the entire Empire, and you will also be able to filter by House, rank, whether they are allies or enemies, and more.

Now with this system, you have a lot of considerations. Sure, you can assign a high-level administrator, but competent ones will be few and far between. What happens if you have a need for a Project down the road that you have to have done quickly? If you pull an Admin, the project freezes until a new Administrator with equal or better Admin rating is put into place. Also, sure it’s great to have a character that will pony up the whole funding for a Project, but they will also get all the prestige that goes with that – is that a character that you want to give a massive power boost to? And if you put characters from the same House all in the Project, they will get a slight ADM efficiency bonus – but other Houses will take note that they have been shut out of Empire Projects, and your standing will suffer accordingly. Also, being an Admin of a successful and provincial-level, say, Project will also accord massive Power to that character. What are the ramifications of that?

With this information, you simply drag and drop characters onto the staffing ring until your funding potential (seen on the upper-left of the staffing ring) reaches 100% or more. You will also be able to gauge how long this Project might take as the Estimated Turns value changes. This is calculated by taking the max ADM allocation from characters that are assigned and dividing by the total ADM required to complete the Project. Once you are happy with everything, you click Execute. The Project is now in Funding status. After a turn passes, if nothing has happened with the characters that are involved in the Project financially or otherwise, they put their money in, the resources are removed from the planet where the Project is based, and the Project begins!

FOR PART II: Cover, corruption, troubleshooting Projects that are behind schedule, and what happens when characters die while involved in a Project…