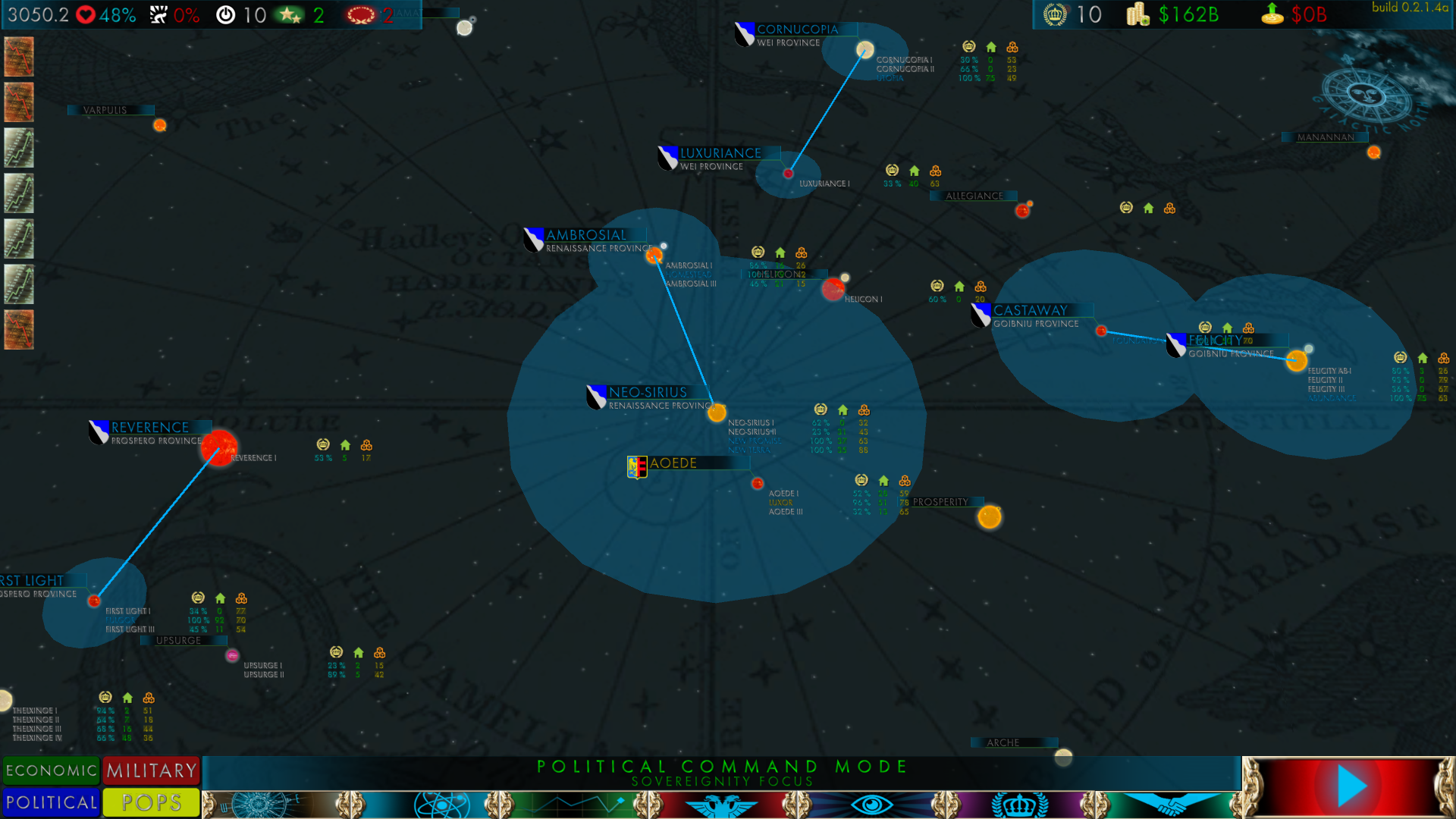 IMPORTANT NOTE:  This blog has been significantly updated, to the point where I am considering posting it as a new blog since much has changed.

Alliance of the Sacred Suns is a 4X game where you have just reached your majority as an 18-year old trying to rebuild humanity’s old empire after a cataclysmic war forced humanity to move to a new quadrant of the galaxy. It is over 1000 years later and you are thrust into a position where, after a string of weak emperors, everyone from planetary viceroys, to system and sector governors, to scheming Primes (basically cabinet heads) is forward to taking advantage of your inexperienced and timid rule.

But you have no such intentions.

You were born with a strange ability: to read and change the minds and thoughts of others. As a leader, this ability is very valuable to determine who you can trust. Your goal is simple: to restore the Empire, to reclaim your standing as Emperor of Human Space, and – perhaps – to guide Mankind into a new and immortal era.

But there is another threat, looming beyond the light-years: the Xyl. Hybrid life forms that first appeared over Earth’s skies over a thousand years ago and forced humanity from their dying world after 2 bitter years of total war in the Exodus of 2033.

Nearly 400 years later, after humanity had found refuge in another corner of the Milky Way Galaxy – escaping through a star-gate of mysterious origin – the Xyl attacked again, and this war stretched out over 2 decades. Finally, humanity managed to introduce a nanovirus that appeared to stop the alien threat, but the ancestors of the year 3050 may have sealed humanity’s fate – just in slow motion.

CONCEPTS:
In AotSS, you do not have unlimited power. Unlike virtually every other 4X game out there, you can not do anything at anytime. You have a small pool of Action Points that you spend to do basically anything, from planning empire-spanning Projects, to communicating with characters in the game, to meeting with your cabinets, to even going hunting. As you age, your pool will gradually increase, reflecting your increased familiarity with how to ‘make things work’ as an Emperor. Most importantly, the Action Point limit puts the kibosh on micromanagement, allowing us to simulate your empire in unprecendented depth without thereby forcing you to spend hours optimising every last trade fleet. Your choice of where to intervene becomes a matter of careful deliberation – the Emperor’s time is precious!

Project are another major difference from other 4X games. In Imperia, you might simply change a planet’s name by clicking the button, typing in the name, and that’s that. In reality, changing an entire planet’s name would have serious repercussions! So what you might have used to simply ‘do’ in other games now require Projects. Projects are massive undertakings that can only be done with stellar-level hardware and resources. Projects allow you to do things like reorganize sectors, change a system or sector capital, build or upgrade starbases, change what a planet produces, etc. Where this mechanic radically differs from most 4X games is that it is your Characters who actually enact the Project – they contribute a portion of their available administrative clout or ‘ADM’ (gained from their position as viceroy, system governor, etc) as well as providing the financial backing to enact the Project. Characters who back a large part of a Project will expect favors and prestige, therefore you must balance allowing Characters who stand against your Empire to grow more powerful, with how important the Project is to your long-term strategies. ADM represents all the planning, infrastructure, transport, ships, manpower, etc. to do planet-shaping things, and abstracts nicely the concept while eliminating micromanagement.

While your word as Emperor is law, there is no way to force how long an Project actually takes to plan, execute, and complete. And this is where the other major system of Imperia comes in – the character system.

Characters populate AotSS(much like Crusader Kings games) – they have their own stats, age, wealth, traits, and ambitions, like you or me. They can be manipulated to do what you want – if you’re cunning. You will often find yourself bribing or sweet talking a system governor who is holding up an important economic stimulus in their system, or perhaps calming down a sector governor who you just took away an entire system from to give to a closer sector, or promoting a loyal viceroy all the way to a sector governor who will be absolutely loyal to you – the character system in Imperia is a powerful and immersive aspect of managing your empire. Character stats are hidden from you until you reach a certain intel level (increased from interacting with them through Actions, or placing your dread Inquisitor squads in positions to gather information), and even then the number is a wide range until your intel increases sufficiently. This is a problem when a character’s love or fear of you is reported as 88 (out of 100) but it it actually a 41! The rule of thumb: Watch what characters actually do, not what they say. They also gain traits that affect their decisions and relationships with you as they age. They can die and retire, or be ‘retired’ by you – either by forcing them out of office or by more ‘direct’ measures. Don’t get caught!

The containers that are populated by Characters are called Houses. These are multi-generational organizations that have been around for centuries, and they often have their own Holdings of planets or systems. In fact, the Celestial Empire consists of the sum of the member House’s Holdings (most of which are held by the ruling House, yours). There are 3 sizes of Houses: Great Houses, which typically have Holdings, a personal military, and a vast amount of resources; Minor Houses, which are still formidiable but generally do not have Holdings, nor the great resource reserves that Great Houses enjoy, and Common Houses, which are all the ‘normal’ Houses that do not have a special history or any real power in the Empire.

Great House Leaders are, other than Primes, the most powerful and important characters in Imperia. Anger a Great House enough, and they may try to break away from the Empire – or to take it for themselves!

You yourself have a starring role as well through Influence. As you make choices through your rule, you will start to gain different types of Influence. Benevolent Influence is the ‘good’ Influence, which calls people to action for your Empire and the pride of humanity. Tyrannical Influence is the ‘evil’ Influence, which is used to threaten and intimidate characters into doing your will – but using it will have other repercussions. In addition, craven characters will gravitate to emperors who stray into Tyrannical decisions, and vice versa – you may have to make some tough choices about removing (or trying to!) governors who can’t stand your alignment!

The game is about less micro and more about making the large-scale decisions that shape an Empire. You will not be building 10 Science Labs to accelerate research; instead you will designate a planet as a Scholarly Conclave and try to install a viceroy that is aligned to the need for research, allowing that planet to grow organically – they will build Academies and attract academia themselves, with a few nudges along the way. You will not be building transports and endlessly clicking materials to go from planet to planet – instead, you will set up trade hubs that serve as collection centers and build starbases of appropriate sizes to move materials and food along from your Imperial capital to sector capitals to system capitals to normal colonies.

From an ‘explore’ standpoint, no longer do you have to build and design scout ships, set a destination, and micromanage exploration and colonization fleet. Would a real emperor do that? Projects cover just about everything you would want to do as an Emperor on a exploration level, from surveying new planets and unexplored systems to creating outposts to creating colonies. You just create a Project on an unexplored planet or system and your people will do the rest (eventually).

As mentioned earlier, planets are not micromanaged. They are very complex entities whose actions are governed in part by their population, the stats of the planet itself, its viceroy, and most importantly its Focus. All planets have at least one Focus – examples would be a farming world, a manufacturing center, a heavy military world, a scientific conclave, a prison planet, etc. Focuses basically shape how a planet will evolve. Depending on the size of the planet, up to 2 additional ‘secondary’ Focuses can also be assigned to more round out a planet’s development.

The population of your Empire will ultimately decide whether you live long and prosper (ha) or die at the business end of a pulser. Populations have their own unrest, age, type, job class, popular support, and needs. Each 1 million people are considered one ‘pop’ (similar to the Victoria system, but much more granular) and they can change jobs, age, die, have kids, migrate to other planets, or even leave your Empire altogether! They can also starve, grow angry, and revolt. They have their own cultures and House affiliation, and careful massaging of public opinion will be needed to ensure your vital Reforms pass without trouble.

And looming out there, making their presence known through your psychic abilities, are the Xyl. They have returned… but when? And will humanity be able to stand against them when their seeds have shattered across the quadrant?

You must pull together the Celestial Empire once more, research military and social technologies that will aid your efforts, unite your Houses against a common enemy, and prepare your subjects for war… a war that no one knows is coming… but you.

That is, if you’re not killed by your people first… in Alliance of the Sacred Suns, the 5th X is… eXist.