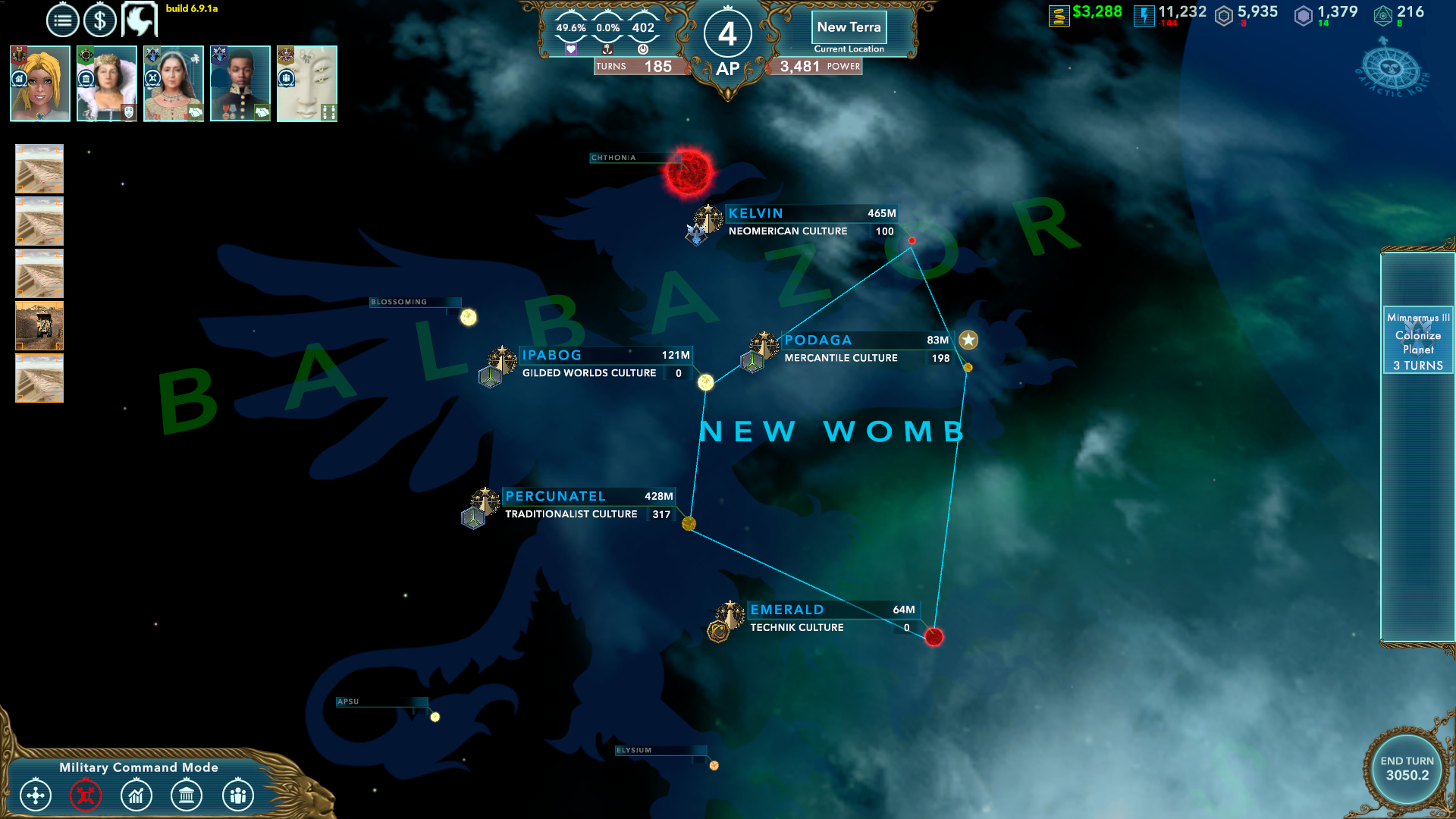 First, a primer of how trade (now) works in AotSS. It’s really pretty fundamental. Your noble merchants on each planet have 2 uses: to build and expand the retail sector on a planet, and to coordinate and organize the gigantic trade fleets that move thousands of tons of materials throughout the Empire. Without merchants, a planet can not create trade fleets, meaning they can not buy materials (this is not a good situation to be in). In addition, a planet can have one of 4 trade states: no trade, import only, system hub, or province hub. As long as a planet has a starbase, they can receive goods, but not create Trades. If they don’t have a Starbase, they’re out of luck. If they have a trade port, they can send materials (called supply trades) as well to their local system or province Hub, but not create economic trades. An outpost would have a trade port so they can forward their materials to a home Hub. Next comes system hubs. System hubs are meant to collect all trade in their system. If their Influence is large enough, they will be able to be part of a Trade Group, which is anchored by a Province Hub. Only Province Hubs have the infrastructure needed to deploy interstellar fleets and send supply trades to the Empire homeworld. Hubs can create as many fleets per month as their level of Starbase, so a level III base would be able to create 3 different economic trades (supply Trades have no limit) and it takes 10 Merchants to create a Trade Fleet (not applicable to supply trades). These Merchants are tied up while administrating these fleets, and are not available for the retail sector during their use. That’s the trade system at its most basic level.

So, let’s look at our neighborhood that we’re going to focus on today.

So let’s look at L’s situation at the start of the game:

So what’s the deal? Why does the viceroy need basic materials so badly? Let’s dig deeper into the planetary situation…

The first thing that the trade manager does is go through each planet and determine what the needs are, how badly the planet needs them, and what the viceroy is willing to do/pay to get certain materials.

Ok. So prices globally for Basic Materials throughout the Empire average $.3 BC (billion credits) per unit. (Remember that a unit is about 100 tons; we’re talking planet-scale quantities.) Let’s see the analysis for Luminescence by the viceroy that is conducted at the start of every turn: (By the way – this is not in-game text – this is generated by an error logger that is accessible for anyone playing the game!)

So this tells us that the viceroy with a low Humanity probably won’t care that much about things like food or energy and will more likely focus on things that build empire like basic/heavy/rare materials. Food doesn’t build warships, after all. The viceroy has a fairly high Intelligence and a high Caution, which is important.

Next, the viceroy determines the monthly import budget. While they are allowed to deficit spend, more intelligent viceroys will hesitate to do that unless very necessary. So in this case, Viceroy Perry has set aside $8.3 BC for trade purposes. He then looks at the relative importance of each good and allocates a tentative budget to each one.

OK. Now the various state and local governments have weighed in on what they feel they need this month based on projected output and usage. This is presented to the viceroy as a ‘shopping list’ of sorts that the viceroy can use or ignore based on what they see fit. In this case. the government feels that rare materials would be nice to have as well, but Viceroy Perry disagrees. He will take their need into consideration, but he is not willing to obliterate his export budget and put out a request for 137 units of basic (or 21 units of rare, which is much more expensive!) so after weighing the factors (which also includes what his House directive is – if their directive is to stockpile resources, then he might be much more willing to overspend) Perry decides to put a trade request out for almost 10 units of Basic, and he is willing to pay up to $0.6 per unit (remember basic is going for about $0.3 per unit, so he’s pretty desperate) This trade request will go out to the entire trade group that Luminescence belongs to (the Podaga trade group) as well as New Terra (with a civ hub they can reach all Provinces)

Now that the trade request is out on the ‘open market’, what happens now?

So each trade hub is looked at one at a time, and if the trade hub is connected to the civilization hub (New Terra) than a check is made there as well. Basically, think of it as a market across the Empire where different worlds are competing for a limited set of trade resources, and they’re posting trade proposals across their own Trade Hub as well as the Empire’s capital. Remember that distance adds costs to trade fleets, so if you live out in the hinterlands you’d better be prepared to pay a lot to get traders to go that far. This is the Trade Hub where L resides, so we’ll look at that process now.

Checking on valid trades for planet Voluspa….
There are no active trade proposals on Voluspa.

Checking on valid trades for planet Illitch….
Trade for basic materials denied due to zero basic surplus.This may be due to lack of production or an excess of caution on the viceroy’s part.

So each trade hub (province, system, New Terra) goes through all the trade requests that they can reach (must be in their Trade Hub or a province hub connected to the capital) They loot at trades on 2 levels: First, can they actually fufill what the request is asking for? To determine that, each Viceroy when looking over a proposal considers their own planet’s needs – are they looking to raise money, hoard materials, some of both? Is the Viceroy a Trader? Their culture also comes into play as to how aggressively they will seek out trades and try to fill them. In Illitch’s case, New Terra (the hub currently being checked) is not willing to part with ANY basic materials, probably because they have a high Caution and/or their House (well, your House, but if this were an AI House it would try to act to the House wishes as long as they don’t have a grudge or a stupid low Honor). So this Viceroy will not trade ANY basic materials to ANYONE this month. This is updated every month, but for now the port is closed with regards to basic.

Checking on valid trades for planet Luminescence….
Trade for basic materials denied due to zero basic surplus.This may be due to lack of production or an excess of caution on the viceroy’s part.

Now the Province Hub, Voluspa, is checking out the trade requests, and making their decisions.

Checking on valid trades for planet Illitch….
Basic material request found for Illitch! Checking stockpiles to see if it can be considered…
Basic materials requested: 2.2 units. Basic materials allocated for export on Voluspa: 51(includes 3 % allocated from stockpiles)
Trade request has been accepted and is now under review: 2 Basic units of basic for 1.2 MCs requested from Voluspa to Illitch.

Bingo! Voluspa’s viceroy is not so tight-fisted as the NT viceroy when it comes to their materials, and they have released 51 units of basic for (potential) sale. As you can see, that’s only 3% of their total stockpile, so it’s not like they’re giving away the farm, so this is probably a pretty Cautious Viceroy. So Voluspa has agreed to review the trade. It now goes into ‘review’ status. Basically, review status is where once all of the trade proposals across the Empire have been looked at and determined what planets could handle them, they ‘compete’ to take the best deal (i.e. the most profitable). Coming soon: Part 2, where we determine what trades make the cut, how fleets form, and how you (the player) can manipulate the trade system to your advantage!)