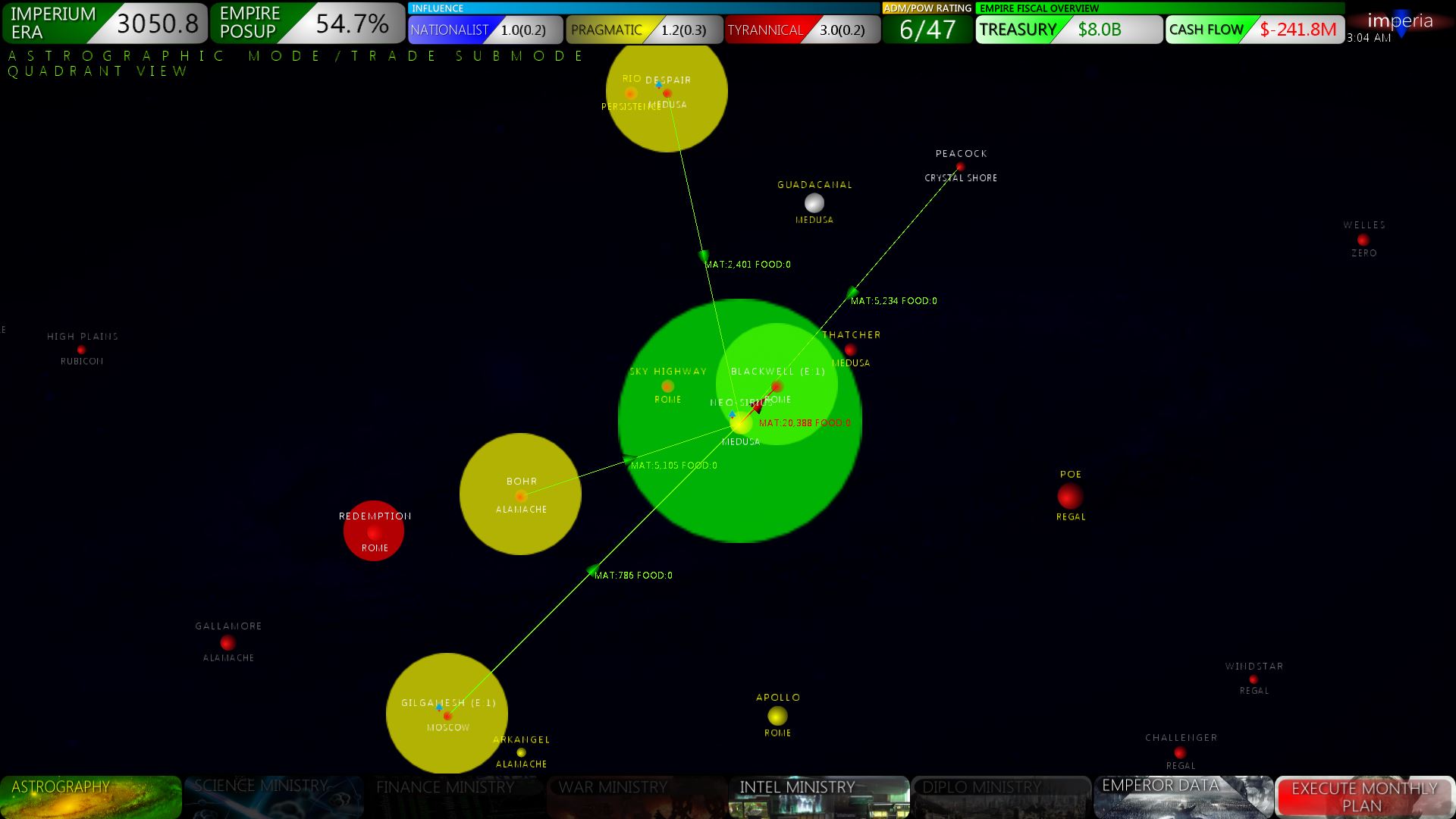 Lot of goodies in the upcoming version of Imperia. This is probably the most feature-packed release yet! I plan to showcase it for next week’s podcast on SGJ, and hopefully release it shortly thereafter.

Notes
* Please uninstall any previous version of Imperia before installing a new version. I have not yet added patch ability. The good news is that the install is relatively quick.

* I am updating the Sourceforge Imperia wiki periodically and this will be the best document for questions and how to play Imperia. Please refer back to it frequently.

Fixes
* Fixed issue where game would crash after dismissing 2nd viceroy in the game
* Fixed issue where logistical stations would not receive food/materials for their planet
* Fixed a small glitch where if you loaded a game anywhere other than the quadrant screen, it would be blank and you would have to refresh it first
* Fixed a terraforming crash bug where it attempted to calculate the terraform amount using a viceroy on an unowned planet
* Fixed some save game issues with character intelligence and greed not saving properly, causing very high intel values upon reload
* Fixed an issue with saves that would cause save games to get exponentially larger if unchecked, although it would not affect the game itself
* Fixed emperor not aging issue
* Fixed several trade/logistic issues; trade should be more consistent and smooth
* Fixed crash issue with adding a system capital and moving the system governor

Changes/Additions
* Added Emperor screen
* Added numerous additional conversation strings to further personalize interactions
* Added Nationalist/Tyrannical continuum and added effects
* Added Nationalist/Tyrannical value effects for every character action
* Added hit to Nationalist rating if you cancel a good Edict equal to double the original effect (to prevent cheese ‘start Edict, cancel Edict’ techniques)
* Added next/previous buttons to Intel screen for easier navigation
* Added additional sort hotkeys to the Intel screen (Unrest – ‘U’)
* Added a check to each planet each turn to adjust the bio rating based on the primary designation
* Added more labels to Intel screen for additional designation types
* Added system trade screen window. This shows downstream trades (moving goods towards trade hubs) and upstream trades (moving goods towards planets that are in short supply). This is the first step in improving the trade/logistical UI.
* Added expanded trade mode UI on quadrant map. This mode will show lines and arrows showing upstream and downstream trades, as well as the amounts moving to and from each system.
* Adjusted trade logic so that planets will not send materials if they are below the goods alert threshold
* Added flag for characters who ask for a starbase to be built in conversation will now no longer hold up construction of it regardless of influence or loyalty
* Added UI feature: right-click will exit any main screen (intel, emperor, etc). ESC will also do the same
* Added remaining Edict alerts on system screen showing what is being built and what estimated time remains
* Updated look of planet status information on system screen for easier readability
* Added mouseover/contact capability for planetary viceroy on system screen
* Added character PoSup foundations: When you have at least level 3 intel on a character or active informers, you can see their PoSup. Will eventually lead to things such as breakaway systems, planets, and sectors if your PoSup is low, theirs is high, and they don’t like you
* Added new Character Action: Have personal conversation – this is another way to increase your knowledge of this character, and when the needs and wants system is implemented, it will give clues to what they want and covet, helping to improve relations with that character (if desired)
* Added toggle on quadrant screen to remove sector lines (default option on ‘no submode’ display mode)
* Added ‘Stockpile Goods’ character interaction. This will always succeed and basically allow the planet to no longer be required to send most of their excess goods to their downstream hub. The character will be grateful and this is seen as a Nationalist act.
* Added ‘Send Goods’ character interaction. This may NOT succeed depending on many factors and will always make the character less loyal and depending on their personality (and the state of the planet) more angry. This is why you should be careful before taking a planet out of the trade network – you may not easily be able to get those goods back!
* Added build number to main status bar
* Added Emperor Continuum display to main status bar for consistent reference without always having to go to the Emperor screen

Balance
* Raised cost of Logistical Station slightly
* Adjusted Nationalist effect of most Edicts downward slightly
* Adjusted Tyrannical effect of most Edicts upward slightly
* Adjusted Tyrannical effect of more Designations that promote military or heavy production or excessive government
* Lowered the chance that characters will reduce government unless they are very loyal and/or strongly Nationalist
* Lowered pool recharge rates across the board
* Changed character reactions to show ‘neutral’ until you have reached a certain level of interaction with them in order to promote more interactions and initial learning about your leaders’ personalities
* Changed Emperor power calculation to take into account your Will and Charisma rating, also dropped somewhat the PoSup rating factor. This will serve to have an initial lower rating early in the game, but more room for growth without having a super high PoSup later