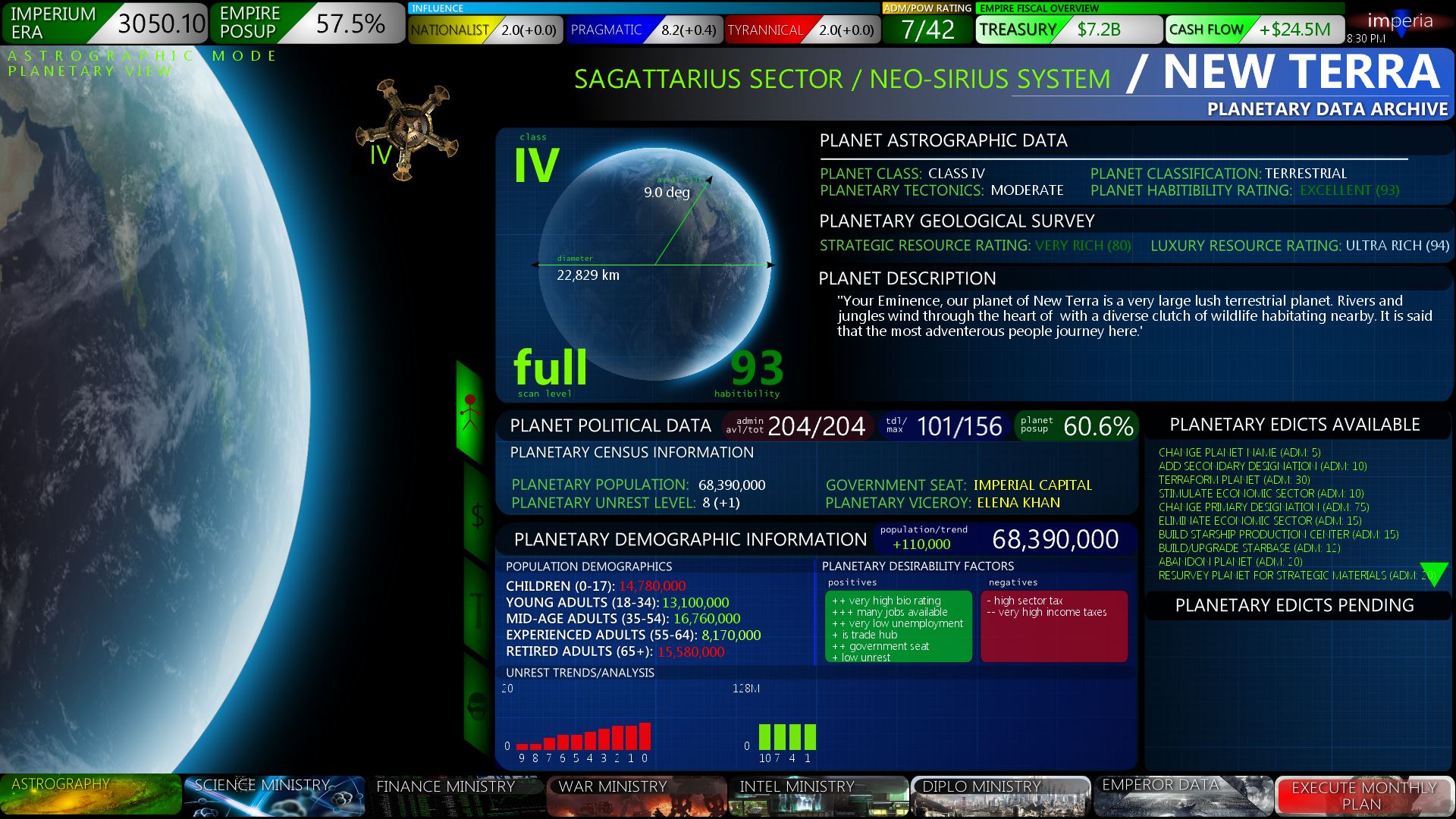 Ah, planets. What 4X worth its salt would not be without them? Planets are the people of the drama that is typical space strategy. You have your science planet, and your manufacturing planets, and your jack-of-all-trades planets, and of course that crazy frontier planet that you only have as an early warning tripwire against the evil neighboring aliens, and whatever happens, hey, they’re just planets, right? After all, you have hundreds of ’em; you’ll never miss just one… right?

Not in Imperia. Here, planets are your tools to shape your empire.

Planets in Imperia are very complex entities. They are governed by viceroys who have a relative amount of autonomy to govern the planet. Depending on their personality, they may adjust taxes (income and corporate),  work to expand and contract sectors that they deem appropriate for the planet’s situation and designation(s), build planet-level structures, and in certain cases, initiate planet-level Edicts (that you as Emperor can overturn). Viceroys are also responsible for the results and execution of Edicts that you initiate, generally with their Intelligence and Power stats.

Since they do have a large amount of control over the planet,  it is important to have viceroys that are aligned to your wants and wishes, and whom are at least fairly loyal to your cause, and you will probably spend quite a bit of ADM in personal interactions with your viceroys in order to make your Edicts run as smoothly as possible.

Your planet screen presents you with a lot of information about the planet. A note here: I am not a professional programmer (I’m actually a sales manager!), nor am I any kind of trained UI artist. As I realize how much data will be available to the player, I will probably be tweaking the look and feel of these screens to present data in the most effective manner (hello, artists out there?!?) For now, I have settled on a primary display with a subdisplay that can be configured into several modes: demographic, economic, production, and intel (construction and military submodes to follow). Let’s look at the main panels of Imperia’s stars:

Here you have your primary info display, showing the planet sector, system, and planet name. The astrographic data of the planet is also displayed, depending on the scan level of the planet. If there has been at least an atmospheric scan, you will see the biological rating of the planet, from 1-100. If you have conducted a geologic scan, you will see the resource ratings as well. Planets have tectonic ratings that determine the chance of events, costs of planetary maintenance, and production costs. The last item is a planetary description.

Planets have 5 size ratings, from 0 to IV(4). The size of the planet determines primarily how many secondary designations the planet can support, but it also determines the maximum development level of the planet. Let’s take a look at the political display for more insight:

This persistent panel shows the planet’s ADM that is available for use, and the total ADM available that the planet generates through their government staffing, size, primary designations, and government seat status. Next comes total development level (TDL) that shows how many levels of development combined that the planet can support. For example, this planet being a class I world with a fairly low bio rating (51) is only able to support 16 total levels of development. It could be 8 in manufacturing and 8 in agriculture, or 4 in each including science, but the planet can not expand until either the planet is terraformed, new technologies are developed, or a sector is deconstructed to make way for a different one. Your viceroys will determine what should be done – it is your responsibility to make sure that your planets can grow!

Next comes the planet Popular Support. In a way, this is the most important number on the screen: not only does it help to determine your empire Popular Support (PoSup) but if it falls too low your viceroy (who has their own planetary PoSup) may decide to effectively ‘ignore’ your requests knowing that his or her people will back them over you, the emperor. When this occurs, it may be extremely difficult to get any Edicts to progress, and you even run the risk of a plot developing on that planet to overthrow your government! As with many UI elements in Imperia, you can get a tooltip when you hover over the PoSup showing what your people are saying to influence it the most.

Finally, your unrest level and the past month’s change and your colony government seat, if any is shown, and your viceroy’s name is also shown. You can click directly onto the viceroy’s name to go to the communications screen or hover for a tooltip of information.

To show the difference in a larger planet, here is your empire capital’s political display and demographic submode:

Note the much larger total development level and admin. Also notice the positive and negative influences that determine how ‘desirable’ a certain planet is. Part of your job as Emperor is to encourage migration to worlds that need labor, which reduces unrest and increases PoSup by giving your pops new and better opportunities, thus making them happier (temporarily). You can do this essentially by providing safe, healthy worlds with good infrastructure and with good economies.

So that’s great, you think. Just take all the large planets you see. What’s the downside? Well…

Here is your Edict Panel:

It shows eligible Edicts for that planet (and their ADM cost), and if there are any active Edicts, it shows remaining estimated time, status, and allows you to cancel them to return the ADM to the governing body(ies) that supplied it.

The ADM for many Edicts is fixed, but many like surveying, terraforming, and changing designations increase time and ADM depending on the class of the planet. So yes, large Class IV planets can hold a lot more development and can be customized more with secondary Designations, but they will cost more to initially survey, colonize, and upgrade. Tradeoffs abound. A small, well run, very high Bio level Class I planet with near optimal resources can actually be more efficient and desirable than a large, dirty, poorly run Class IV planet.

There are a lot of factors in play to have a successful planet. Designations themselves have tradeoffs: some, like Military Production worlds, pay a lot in wages and are economic powerhouses but damage the Bio rating of the planet over time, and Unrest is generally higher since they are dirty, industrial worlds with a more ‘rough’ populace. By comparison, while Agriculture worlds may be a loss leader (and require a subsidy from the Sector or Empire treasury) they may be critical to growing enough food for your Empire – and with a high Bio rating, more babies will be born healthy, ensuring long-term stability and labor for your Empire. Taxes must be modified as unrest rises, and you may have to coax your Viceroy into doing so – or perhaps finding another way to manipulate your erstwhile servants??

NEXT: Planets and Pops, Part II