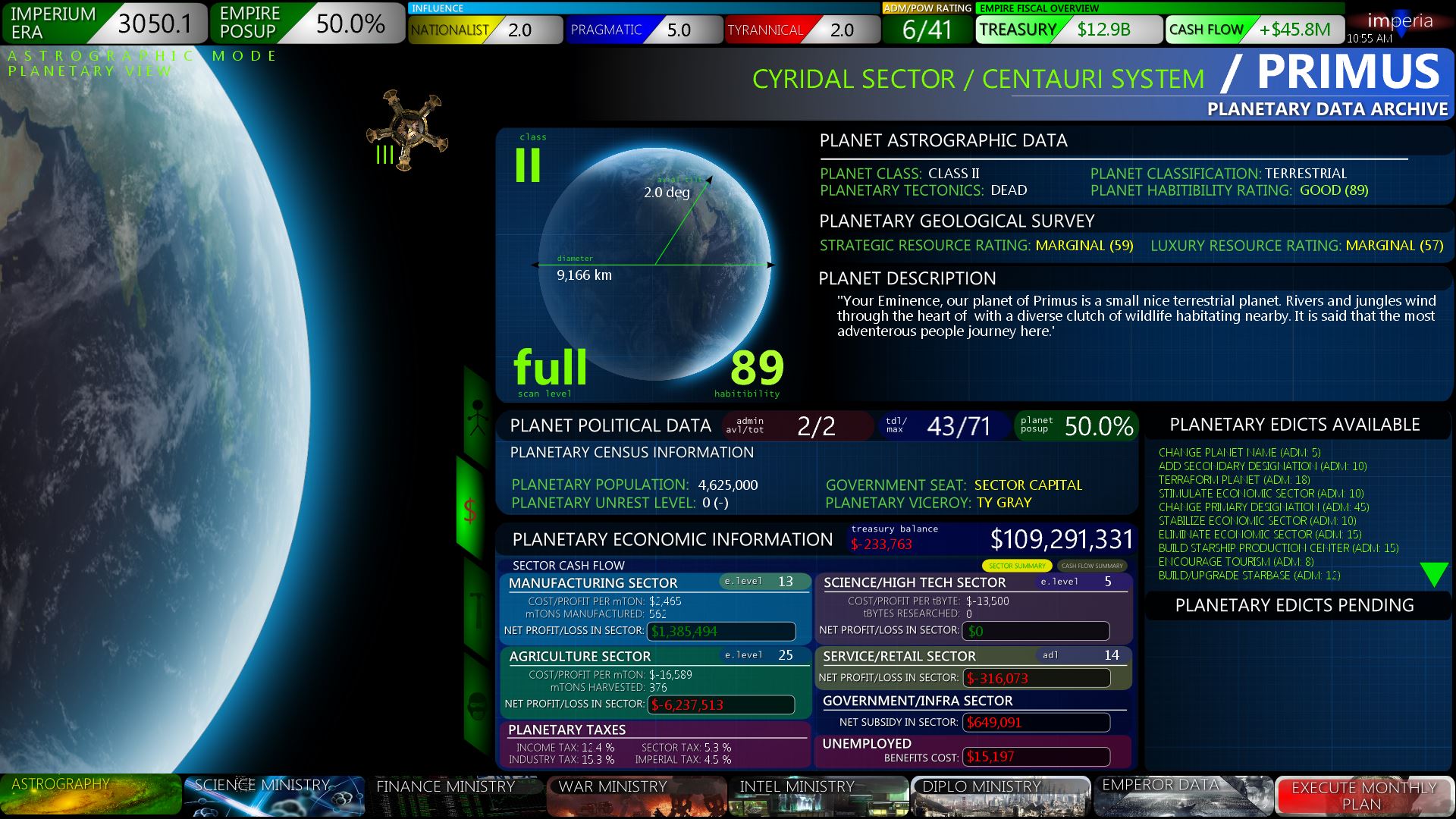 In most 4X games, you build buildings or objects that produce X amount of materials/food/energy that is then stockpiled to eventually build things. In this regard, Imperia is not actually that different. The main difference is that you have what are called economic sectors that determine what is produced on the planet. There are several different types of resources in Imperia:

So how do resources get generated? Well, each sector has a base level that abstracts how large and advanced the sector is. From there, taking several factors into account, such as the Empire level of that sector, the habitability of the planet, the tectonic level (for manufacturing) and a few other factors, a ‘raw output level’ is generated. From there, actual output is calculated from efficiency: how many people actually work in the sector vs how many can, and unrest plays a part if it is above a certain level.

The profitability of a sector is determined by how much it costs to produce one item vs. how much it sells for on the planetary market. Wages play a big factor in determining cost. While you can not directly set wages (your viceroys will do this depending on their preferences and traits) you can expand a sector, which will raise wages to entice people to come work there. Each sector also has a base ‘desirability rating’ which is the second number to the right of the wage shown in each sector summary. This represents how ‘desirable’ the job is with a combination of wage and prestige. Agriculture jobs are considered the least desirable, with scientific and government jobs (depending on your Popular Support!) the most. This means that your viceroys may have to overpay in order to fill a less desirable sector if jobs are plentiful. You may influence your viceroys to raise or lower wages through conversations, but it will not have as great an effect as through an Edict.

So what happens every 3 months? Your viceroys will determine building for the next 3 months – whether a certain sector expands, stays the same, or contracts. They will also set wages based on profitability, need of the sector, and sometimes just plain greed (they get a cut of the planetary taxes, after all!) This depends most on the Designation of the planet, but is also influenced by the viceroy’s wants and needs, and the needs of the planet. If you are out of materials, you can not build anything new, and in fact your sectors will slowly decay!, putting people out of work and raising unrest! This is why it is so critical to have either a robust trade network or to have a planet capable of self-sustaining itself!

Thanks for reading! – Steve